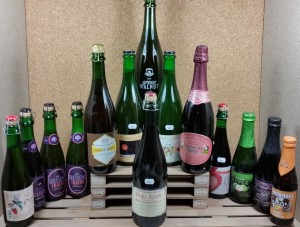 Belgiuminabox.com is happy to announce another release in our Tasting Favourites-Series.

We have put together yet another fine selection of Lambic brews!

This time we managed to get a collection together with a wide range of Fruit-Lambics with as many different kinds of fruit as we were able to.

With the recent re-release of the Cantillon Fou’ Foune, which all lambic lovers have been waiting for, together with Oud Beersel’s Green Walnut, Pierre Tilquin’s Mûre and many more we succeeded in putting together a collection worth being labeled ‘Tasting Favourites’. Along with previous releases like the Lambic Blends Collection’s, Horal and Friends and others which all sold out quickly, we are confident this pack will be appreciated by any Lambic enthousiast.

Here’s a quick line up:

So if you want to get your hands on the ultimate Fruit-Lambic Collection of 2015 this is were you have to be.