Duvel is renowned the world over for its re-fermentation in the bottle and the bitter aftertaste it draws from the hops.

Inspired by an old ad for a “Hopbier” by Duvel-Moortgat, the master brewers took to experimenting with the extra hopping of the Duvel.
The extra hopped beer was brewed for the 1st time in 2007 and it was sold out in only 2 days!

The beer met with such enthusiastic reactions and initiatives that the brewery had no choice other than to brew this special, intensively hopped beer one more time.
No fewer than 3 high-quality hop varieties were selected to make the Duvel Tripel Hop, including the traditional Czechen Saaz-Saaz, Styrian Golding originating from the Savinja River Valley in Slovenia and American Amarillo, that is known for its distinctive bitterness and spicy character.

Duvel Tripel Hop is the result of the technique known as “dry hopping”. This involves adding Styrian Golding hop-heads to the beer at a later stage (than normal).
The outcome is a unique brew with a rich pallet, extra hop flavors and increased hop-bitterness that result in a bone-dry aftertaste.

The beer is very drinkable for its 9.5% alc/vol and isn’t boring for a second. 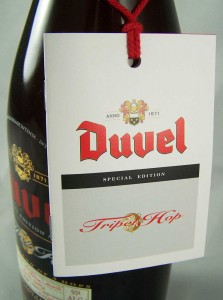 On Thursday, September 30th 2010 the “new” Duvel Tripel Hop was presented to the press and a select group of beer-connaisseurs, calling themselves “de lambikstoempers”. According to the beer-tasters this year’s version is even better hopped than the 2007 version.