During World War I, Ypres was the centre of intense and sustained battles between German and Allied forces.
During the war, due to it being hard to pronounce in English, British troops nicknamed the city of Ieper as “wipers” 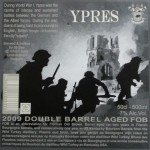 The Struisse Ypres, a Flemish Old Brown ale at 7 % ABV was difficult to develop.
The most tricky factor was achieving balance between malt and sour, says Urbain the Master-Brewer at De Struisse Brouwers.
The recipe was wiped out many times in between trial and error !!
The Flemish are renowned for their stubbornness, obstinacy and perseverance.
Apparently Struisse suffers from similar symptoms…

After all of the above, Urbain Coutteneau is happy to bring you some good news too.
The Struisse ‘wipers’ managed to deliver a fruity brown ale with a subtle acidity. The wonderful aromas and flavors brfought additional complexity by aging “Ypres” in Burgondy barrels for 2 years and a consecutive year in Bourbon barrels.

Enjoy, but one drinks the Struisse Ypres 2009 FOB best with moderation !!

Struisse Ypres 2009 is only available in 0.500 L bottles on Belgiuminabox.com