I am glad to announce that beer-shipments from Belgium to the US is back on track.
Belgiuminabox is receiving feed-back from all our regular clients that the boxes arrive “in a timely matter” and “in good shape”.
Shipments are followed via a “Track ‘n Trace” system from sender to receiver.
Belgian and US Customs are playing a vital part in clearing the shipments to enter the US.

Belgiuminabox will continue to do their shipments through BelgianPost and US Postal Services.

BelgianPost has proven to be very a reliable partner, thrust-worthy, safe and the most cost-saving solution for oversees transport.

On Sunday May 1st, on the Tour De Geuze 2011, Armand Debelder from Geuze-Stekerij 3 Fonteinen released
and introduced his latest Diamond-status Armand’4 Oude Geuze Lente to the public.
This outstanding brew is a mix of 1, 2 and 3 year-old 3fonteinen-lambic.
The brewing, aging, blending and bottling was all done with the signature of Master-Brewer Armand Debelder.
The bottle itself is a classy Champagne-shaped bottle.
This one-timer and limited edition is already a masterpiece and according to the beer-connaisseurs from BeerAdvocate and Ratebeer a class in it’s own. 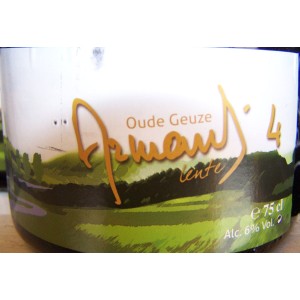 When I picked it up at the brewery Armand told me a little bit about the brewing of this magnificent Geuze while showing his cellar, he only used Challenger hops in the process.
He is in fact the only Geuze-Lambic brewer to use Challeger hops to brew his beer.

The Armand’4 Lente (spring in English) is greeted by lambic-fans worldwide.
Belgiuminabox is pleased to be able to sell this great masterpiece.
I wish Armand the best of luck and I hope he’ll continue to make great brews in the future.
Cheers,
Kurt.

Anyone who is drinking a Hoegaarden White beer in the coming days, take a minute to remember Pierre Celis.

The master-brewer from Brewery Hoegaarden passed away last Saturday in his beloved village Hoegaarden.
In 1966 Celis started his own brewery in an old farm-house. He still new of how to make “Witbier” from the days he helped as a child in the local brewery of Tomsin, a “Witbier” brewer.

In the first years Celis brewed for fun. His wife told him to take the Witbier with him on his milk tours and try to get a price for it from the villagers. Clients were enthusiastic about the fresh-sour taste and soon demand for the beer soared.

By 1979 the brewer Pierre Celis bought a brew-house “De Kluis” in Hoegaarden and “Hoegaarden Witbier” was (re)born. Celis decided that his Witbier ought to be poured in the now typical Hoegaarden jam jars. A recipe for success was born.

In 1990 Celis sold his brewery to Interbrew (now AB InBev). A couple years later he decided to move to Austin, Texas and start all over with a new brewery called “Celis Brewery” and brew his beloved “Celis White”. An instant success. After one year he already brewed 28,000 keggs of his beer. Only a couple of years ago he sold his brewery in the States, came back to Belgium and retired in Hoegaarden. He died of cancer at the age of 86.